I write with hands clasped in gratitude and in prayer.

I returned from an all too brief trip to the Adirondacks. There are an equal number of philosophical questions remaining as there were prior to my departure. This quote from Charles Bukowski is cause for my continued reflection. Charles said, “The freeway always reminds you of what most people are. It´s a competitive society. They want you to lose so they can win.” This concept of competitiveness is one which I no longer comprehend. I barely comprehended this concept when I was younger and am unsure that I ever did. Perhaps it is age and the accompanying maturity. Competitiveness is a concept with which I struggle, especially as I grow older. In the four days which I spent in the Adirondacks, I spoke to no more than four people. Two of those “conversations” were to place an order for food so I am unsure if they qualify for the definition of “conversation”.

I arrived on the Rock River trail and breathed a sigh of relief that there were no cars at the trailhead. This meant, at least for the time being that this would be a solitary trail run. As I approached the sign in, a smile formed on my lips as I noticed there were no other signatures indicating hikers or trail runners remaining on the trail. After signing in at the trailhead, I began my trail run on a soft, leaf covered trail. The sound of the leaves crunching beneath my feet and the trees bare of leaves, reminded me of Fall. This trail, I am guessing is a seldom used trail. I worked my way over a few rolling hills before descending to a low-land area with Rock Lake on my right.

I was able to see the lake through the trees which, at this time of year remain naked. The buds on the accompanying branches not yet exposing their secret. Another hundred yards down the trail and I heard the sound of water cascading over large rocks. This would be Rock Creek. I stood in the middle of the footbridge spanning the creek, the sound of the creek louder than I had expected considering the width of the creek was no more than ten feet. I was reminded that everything, especially to me is louder than what would be expected in the Adirondacks. I was also reminded of this fact as I perused the headstones in a cemetery at the entrance to the park. A break in traffic passing the cemetery left me in total silence save for what appeared to be a buzzing in my ears. Perhaps the buzzing was me adjusting from the constant bombardment of noise to the profoundness of the Adirondack silence. 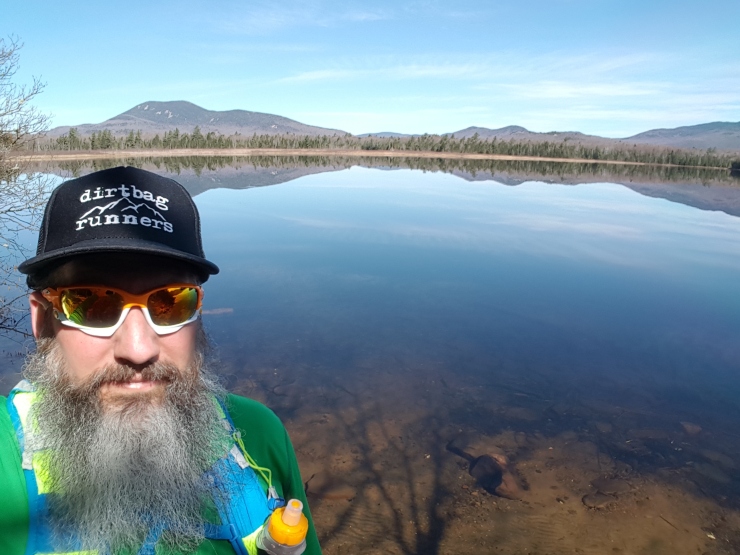 As I made my way back on this 3-mile out and back trail, I decided to branch off onto another trail. This trail was no longer marked by the “hiking” blazes but by red “snowmobile” blazes. This trail was wider and marked by more frequent changes in elevation. It also extended this run from 6 miles to 14.5 miles with an elevation gain of over 1000′.

In his book, “The Art of Seeing Things”, John Burroughs shared the following thought, “So far as seeing things is an art, it is the art of keeping your eyes and ears open. The art of nature is all in the direction of concealment. The birds, the animals, all the wild creatures, for the most part try to elude your observation. The art of the bird is to hide her nest; the art of the game you are in quest of is to make itself invisible. The flower seeks to attract the bee and the moth by its color and perfume, because they are of service to it; but I presume it would hide from the excursionists and the picnickers if it could, because they extirpate it. Power of attention and a mind sensitive to outward objects, in these lies the secret of seeing things. Can you bring all your faculties to the front, like a house with many faces at the doors and windows; or do you live retired within yourself, shut up in your own meditations? The thinker puts all the powers of his mind in reflection: the observer puts all the powers of his mind in perception; every faculty is directed outward; the whole mind sees through the eye and hears through the ear. He has an objective turn of mind as opposed to a subjective. A person with the latter turn of mind sees little. If you are occupied with your own thoughts, you may go through a museum of curiosities and observe nothing.”

May you be able to experience such beauty in your life.